The Leave No One Behind coalition in Kenya was founded in 2018. Country co-leads are VSO Kenya and Plan Kenya. The SDGs Kenya Forum is chair of the national steering committee.

The country coalition has delivered a project pilot between 2018 and 2019, focussing on women, people with disabilities, young people, farmers, elderly people and slum-dwellers. Target SDG was SDG 10.2.
The scaled up project will be conducted between 2020 and 2022, focussing on SDGs 1, 5, 10 and 16. Goal is to identify drivers and level of marginalisation among people with disabilities and other marginalised groups in four counties of Kenya. The project will reach 10,425 people (750 persons per county; total direct reach 3,000 persons with disabilities).
Pilot Project (2018-2020)Ongoing Project (2020-2022)
Country PublicationsTargeted SDGs

No more pushing us back! Towards Better Data By and For People with Disabilities in Kenya

This article—cross-posted on the the Global SDG Knowledge Hub in July 2021—highlights the situation of people with disabilities and how the Kenyan LNOB coalition supports their empowerment. 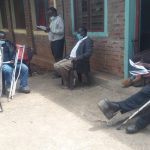 Report: Disability Inclusion Research on Determining the Drivers and Level of Marginalization among Persons with Disabilities in Four Counties of Kenya

This report presents the findings of a Disability Inclusion Research which was commissioned by the Kenya ‘Leave No One Behind’ Consortium and conducted in four counties of Kenya (Siaya, Taita Taveta, Makueni and Embu) in February/March 2021.

This policy brief overview summarises the proposed policy direction to address gaps, and the root causes of marginalising factors identified by Kenya Leave No One Behind Initiative (February-April 2021) research on disabilities.

This policy brief reviews the key gaps identified in county-level research on disabilities in Embu County by the Kenya Leave No One Behind Initiative (February-April 2021) .

This policy brief reviews the key gaps identified in county-level research on disabilities in Makueni County by the Kenya Leave No One Behind Initiative (February-April 2021).

This policy brief reviews the key gaps identified in county-level research on disabilities in Siaya County by the Kenya Leave No One Behind Initiative (February-April 2021).

This policy brief reviews the key gaps identified in county-level research on disabilities in Taita Taveta County by the Kenya Leave No One Behind Initiative (February-April 2021). 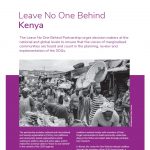