The Leave No One Behind coalition in Vietnam was founded in 2018. From 2018-2020, country lead organisation was ActionAid Vietnam. The current lead organisation is the Management and Sustainable Development Institute (MSD). The VUFO NGO Resource Centre acts as strategic support of the coalition.

The country coalition has delivered a project pilot between 2018 and 2019, focussing on people living in poverty; ethnic minorities; people with disabilities; elderly people; young people. Target SDG was SDG 10.2. The scaled up project is underway and aims to create space for civil society and for citizen-generated data to be used in official SDG monitoring processes. The project focuses on CSOs, children and youth, women, LGBTIQ, people with disabilities and ethnic minorities and aims to reach ca. 600 people per research location, expecting to reach a total of at least 3,000 people during the project period (May 2021 – June 2022).

In Vietnam, the coalition has engaged collaboratively with the Ministry of Planning and Investment to promote the use of non-government data in SDG reporting and to inform planning and policy on SDG implementation. At least one member of the coalition was present at each of the formal consultations with civil society on Vietnam’s 2018 VNR, and data and case studies supplied by the coalition were also included in the VNR which boosted the representation of marginalised groups significantly.

The ongoing project in Vietnam is supported by Sida.

The LNOB Vietnam coalition introduces itself 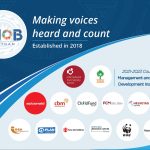 This report presents the achievements of the Leave No One Behind Vietnam in 2020-2021. 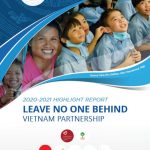 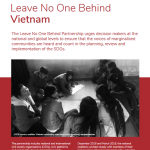 Our Target SDGS in Vietnam