By the Leave No One Behind Network, Bangladesh

The COVID-19 pandemic has caused grave and disproportionate impacts on Bangladesh’s marginalised groups, new evidence reveals. The country’s health-delivery and social security system has been severely affected, and tragically, thousands of lives are being lost.

This evidence is contained in a report titled ‘Citizens’ assessment of district level COVID-19 responses: Focus on food-cash assistances and health services for the marginalised groups,’ written by the Leave No One Behind (LNOB) Network, Bangladesh. “Since the outbreak of the pandemic, due to lack of preparedness and inadequate capacity, the Government of Bangladesh has been unable to effectively target the provision of social safety net packages for marginalised groups,” the report concludes.

[1] The River Gypsies (also known as Water Gypsy or Nomadic People) are an ethnic group of Bangladesh. Locally, they are called the Bede people. They live in poverty and more than 96% are considered as illiterate. The River Gypsies traditionally live, travel, and earn their living on the river.

What did we find? In the context of COVID-19, a deeper crisis is unfolding. As Bangladesh battles through cyclical surges in infections, the pandemic is also making socio-economic inequality and exclusion more severe.

According to ethnic minority people in Rangpur District, they have been discriminated against by health workers when seeking treatment at public hospitals. “During the lockdown period, we have been suspected to be carriers of the coronavirus. We are avoided wherever we seek treatment,” a focus group participant said. “Because of social stigma, marginalised groups have been turned away from referral hospitals without receiving treatment,” explains the LNOB Network report. 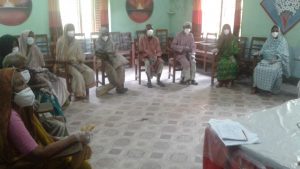 Concerns about food insecurity also emerged. Based on the district-wide scorecards, about half of the districts received low scores (20-40%) on food and cash assistance indicators. The lowest scores were registered in five districts: Narail (20%), Rangur (20%), Nilphamari (22%), Feni (25%), and Bogura (25%).

In Narail District, groups such as river gypsies, beggars, and Dalits spoke of being deprived of food or cash assistance during the lock-down that lasted from March to June 2020. “We had to go without food for days,” said a participant during a focus group discussion. “We have been harassed, simply for asking for food assistance,” a sex worker in Tangail District said. “It’s not acceptable.”

The threat of gender-based violence and incidences of misogyny goes beyond looking for help with food. A report by UN Women on the “shadow pandemic” of violence against women during COVID-19 observes this disturbing trend: “Since the outbreak of COVID-19, emerging data and reports from those on the frontlines have shown that all types of violence against women and girls, particularly domestic violence, have intensified.”

Because of a sharp economic slump, informal sector workers have lost incomes. “The Dalits and ethnic minority people who worked in barber shops or as rickshaw or van pullers suffered the most as they had to shut down their work and, at the same time, did not get any food or cash assistance,” according to the LNOB Network’s report. “All their savings were wiped out during lock-down periods.”

These community experiences are not isolated examples. Globally, it has been established that the pandemic is pushing marginalised groups into extreme poverty. In a foreword to the 2021 UN Sustainable Development Goals Report, UN Secretary-General Antonio Guterres writes, “The global extreme poverty rate rose for the first time in over 20 years, and 119 to 124 million people were pushed back into extreme poverty in 2020.”

Inequality has always been an imposing and bitter feature of Bangladesh’s socio-economic fabric. In the absence of a comprehensive support package and social protection programme, the rapid economic growth of the past few decades still left marginalised groups chronically poor. The economic growth has not been fully inclusive.

The LNOB Network, together with a broader array of civil society organisations, is aiming to address this reality amid a new major concern in Bangladesh: the highly infectious delta variant of COVID-19. New records of infection rates, amidst slow progress in immunisation, are overwhelming the already limping public health delivery and social security system.

On 1 June 2021, BRAC, the host of the LNOB Network in Bangladesh, and the CSO Alliance partnered with the Directorate General of Health Services (DGHS) of the Government of Bangladesh in a massive community-outreach initiative targeting 35 districts at high risk for COVID-19 infection. The project seeks to contain the spread of the virus through four core interventions – free mask distribution, awareness building for prevention, immediate response, and vaccination.

The LNOB Network is determined to work with marginalised groups in bridging knowledge and data gaps for a better targeting of social assistance programmes. However, according to the report, meaningful change requires a more concerted effort to tackle the multiple and intersecting structural drivers of poverty and inequality.

In the wake of food, cash and health challenges, the LNOB Network has shared its Scorecard approach with key ministries. There is a consensus that social assistance programmes, including steps towards achieving the SDG target on universal health coverage (SDG target 3.8), need to be accelerated.

The Government of Bangladesh has confirmed its intention to introduce a public health card system that is inclusive of the situation of marginalised groups, enabling them to access community health care services.

“Our coalition is in ongoing consultation with relevant authorities about the further steps towards introducing this card. If government succeeds in availing this service, that would represent a major improvement with regard to the accessibility of public health services for disadvantaged groups in our country,” says Evana Tanzila, a Policy Analyst Advocacy for Social Change, BRAC.

The network is affiliated to the LNOB Partnership. The partnership is composed of the twelve largest international NGOs and country-based coalitions based in Bangladesh, Kenya, Nepal, India and Vietnam. The International Civil Society Centre acts as the partnership’s global secretariat. Established in 2017, the partnership’s main goal is to deliver a practical solution to the lack of data that sufficiently captures the needs of marginalised groups in official monitoring statistics, giving voice and agency to marginalised groups who are at risk of being overlooked in the implementation of SDGs.

This article is written by Davie Malungisa, consultant to the Leave No One Behind Partnership. Malungisa is a lawyer based in Johannesburg, and formerly an advisor to Amnesty International and Oxfam America. The article is published simultaneously on voicescount.org and the Global SDG Knowledge Hub of IISD.